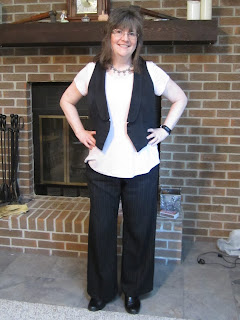 SO...here's the Vogue 9057 top that is fresh off the sewing machine as of 10 PM last night...which is something, considering the flat fabric arrived on my doorstep about 2 PM yesterday afternoon.    The color is terrible to photograph...a pearly dusky pink.  Which is pretty much the standard interpretation of 'mauve'.  But it looks washed out beige in about every photo.  Worn with the Burda vest that I wear All. The. Time. and the pin stripe tropical wool modified Oxfords from last year's SWAP collection.  Interesting thing about those stripes...I think they're tan and gray, but, being only two threads wide, they can read as other colors...including mauve and lavender. 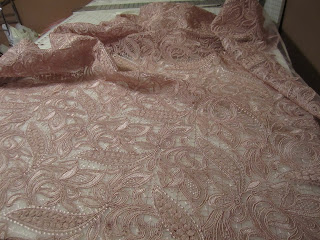 That same box contained 2 yards of  a mauve-ish lace yardage as well, but it was something of a disappointment.  The color is perfect and the pattern is lovely but...it's very stiff, being embroidered/couched on fine nylon net.  I had rather anticipated some drapey lace and had something in particular in mind.  But it's not at all drapey.  Whatever I do with it...it's going to be kinda like wearing denim, as it's about that stiff.  And there are odd spots in it here and there where the filler in the cording shows through...and it's a kind of odd, oh,  greasy-sewing-machine-lint color.  I may be able to satin stitch over it and cover it up, but it's rather annoying.  Why did they use such a yucky filler for the cording?


But it is pretty at a distance, anyway.  I thought about making a denim-style jacket out of it , but I really don't have time for anything that involved. I'd like a long vest, but I'm not sure if it will hang or stand, if you know what I mean.

My own personal sewing challenge...make something I can wear by Friday this week.    So it's gotta be ridiculously quick.