Another day of finger - crossing...

So, last night I undertook to trace off the skirt bits of the dress pattern and attach them to the bodice pieces that I'd traced for fitting purposes.

Then I measured my fabric and discovered that it's 6" narrower than I thought, and I lost a fuzz over a quarter yard in length when I pre-washed it.  Given that it has a pronounced directional print that meant I had to cut everything oriented the same on the cross grain, I did a little trial laying-out on my cutting table mat and discovered that I was around 20" short of having enough fabric.

Gnashing of teeth ensued; I considered making another dress altogether; a sheath dress out of some pretty dogwood-floral-print cotton sateen but, when I pulled the fabric out, realized the black background wouldn't work.  I pulled my Loes Hinse City Dress...a stick straight pattern that should fit on the fabric I have...and then had a thought.  What if I just reduced the amount of flare on the gores?  AND...that would allow me to balance the flare on the grainline.

So, after another round of pattern alterations I did another layout and, if the math works...I have 3" to spare.  And then it was time to take a break and do the hand work on the altered bridesmaid's dress, so I can tackle cutting out my dress after I've had a bit of a sit-down.

I will be cutting that  puppy out single layer, to move every piece as close as possible together, and crossing my fingers, because. there's no going back if it's wrong...although I may end up piecing a bit if I have to. 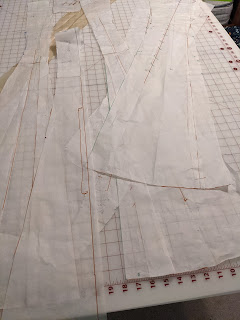