Hey, y'alll, I'm finally feeling not-so-jet-lagged after spending a week basically working and sleeping.  There is a MOUNTAIN of laundry to be done, so whilst the machines are running I thought I'd give you a little rundown of the wardrobe I took with me to Israel.

Once I had everything packed, I realized I pretty much just took black and white, with a pinch of denim/chambray.  I took white tank tops, black tank tops/sleeveless knit tops, and some black-and-white striped tops, both sleeveless and sleeved; my journey home top was the black and white stripe T from the April wardrobe.  My 5-pocket Lands End yoga pants were the airplane pants, and I took my gray denim jacket for those chilly over-airconditioned planes, and it was a good thing to have when I got up before dawn to take sunrise pics in the Judean desert as well.  I took 3 long sleeved white shirts to wear as sunshades; I had a fourth shirt but it needed a tank top, specifically under it as it was a gauzy pull-over and I messed up and wore the tank tops with the button up shirts.  So the gauzy shirt rode there and back.    I took a pair of jeans and a pair of denim crops, but the best thing I took were the tencel gauze pants that I made back in 2003...Let's see if I can find a pic... 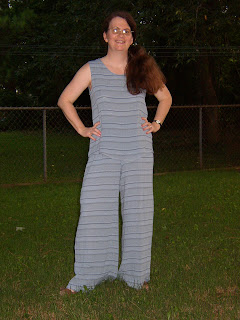 Bingo!  The photo from 2003.  When I was considerably smaller than I am now, but those pants are so blousy that they still work (elastic drawstring waist helps!).   The desert breeze flowed right through.  I was wishing I'd had about 4 pairs of pants from similar fabric.  The final pair of pants that I wore was the ponte pants I made for January's outfit.  They worked on the last day of the trip, where we were primarily in a museum and riding in the bus back to Tel Aviv.  I changed in the airport.  I have a lightweight wool challis scarf that I sealed in a zip lok bag in my carry on so I could pull it out if I got chilly; that worked much better than those silly polyester knit blankets the airline provided.

I took shoes for the airport that were easy on/off and had adjustable straps to allow for swelling; I had two different pairs of tennies that I alternated in country.  I took some sandals, but I ended up not wearing them because I didn't want to worry about sunscreening my feet (why didn't I think about that before I packed them?)

One pair of earrings that I wore all the time was the only jewelry I took.

So, yeah, I didn't really look fancy, but I stayed reasonably cool (there was ONE day when I was borderline uncomfortably hot), had no problems with sunburn (thank you 50 SPF), and managed to keep the load to my small suitcase, a canvas carry on that I did not have to gate check when they announced they were gate checking all wheeled bags for the connecting flight, and a backpack. 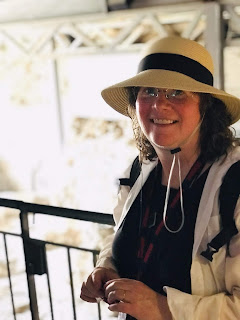 The hat packed great and held its shape wonderfully.  I need to remember to go leave a nice review on Amazon, lol.

I've been posting pictures on Facebook; I made the album public so I think you can see it by clicking on that link; if you click on the pictures you can see the running commentary. It was an amazing adventure and I still have a lot of personal processing to do.