Well, well, everything always happens at once, right?

Our church will host the Holocaust Memorial service this year in our auditorium, and the drama team has been asked, by the organizers of the event, to present a dramatization of Martin Niemöller's short poem, 'They Came for Me':

First they came for the Socialists, but I did not speak up,


So we have, on stage, a character representing Niemöller, and groups of folks who represent the socialists, the trade unionists and the Jews.  And the Bad Guys, who I am not going to name.

One of the young guys in the worship team has created an incredible audio/video piece w/ music, newsreel footage and photos, and a voice over w/ Niemöller's poem, quoted line-by-line, first in German and then in English.  We were going to go rather abstract, just using different colored t-shirts to indicate the different groups, but apparently the imagery on the video is so compelling that the leaders felt abstract costuming would detract from the narrative rather than enhance it. So it's a last-minute change of direction and we are scrambling for costuming. Other team members are scouring thrift shops at this moment to find suitable things.

So my job is to make the armbands for the, um, Bad Guys, with their well-known pinwheelish Symbol That Shall Not Be Named, and gold stars to pin on the Jewish characters.  The others will just be in somewhat period suggestive garments and identified by the voiceover. 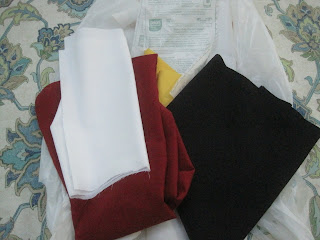 I hit Hobby Lobby yesterday afternoon to get the bits of fabric in the right colors.  Including the Wonder Under for the applique, it was less than 10 bucks.  ( And I'm not running this through the yardage in/yardage out...not worth it...)

So I'm interrupting my dash to the finish for the SWAP and the 12-months-12-outfits challenges to do a little bit of fiddly sewing.

An update on the cropped pants...I wasn't happy with the way they looked.  They are still too loose in the leg to be what I envisioned, and I should have started the flare  about 3" higher than I did. I also didn't like the way the deep hem looked.  So I'm probably going to do a little hacking and re-sewing on those.  The black and white striped mariniere  top will take a couple of hours, start to finish, so I'm not really worried about it...much.

But the Holocaust service is May 1st, and we have two rehearsals between now and then.

So, yeah, gonna be sewing.