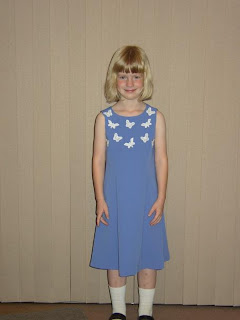 I will post more about the things sewed for the wedding as the week progresses.  Unfortunately, I did not manage to get a good shot of the MOB dress at any point Saturday, so I'll need to put it back on and have someone point the camera at it.  The pictures I did see, though, revealed some fit issues that the mirror did not.  I really could've benefited greatly from one more muslin; it's a pity I didn't have time.  But I did learn some things about drafting and fitting...and it probably fit at least as well as something bought RTW would've fit.

I read back over the wedding posts and realized I never mentioned what happened with the bridesmaid's dresses.  At the very point at which I was ready to dig in and start the manufacturing process, the Bride decided that it would be easier on me if each of the girls all just went out and bought a grey dress that she liked.  So long as it was sleeveless and knee length, she was happy with it.  So we had an eclectic mix of dresses in a couple of different shades of gray (one had some black accents, which went with the overall color scheme) that actually looked very nice together.  Made the guys, in their rented suits and matching ties, look kind of cookie cutterish in contrast.

And I suppose the best thing is that none of the girls will ever wear their dress in an 'Ugly Bridesmaids' pageant...
Posted by Lisa Laree at 7:35 PM

Labels: Sewing for Kids, The Wedding of the Princess