There were six aprons in the box from the old trunk; the first two appeared to be made from the same basic pattern.  The fabric and lace are different but they are created the same way: 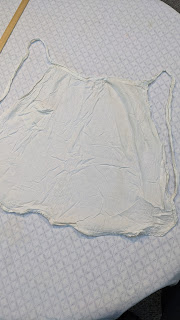 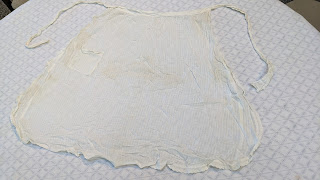 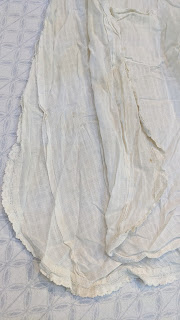 Theres' a center panel, with extensions seamed on (click on the picture to make it bigger; I've folded it in half, then folded back one edge so you can see the seam allowances and the side panels).  The edges of the center panel on both aprons are selvedges; this fabric was 24 1/2" wide.
I'm wondering if it could be left over from the infant gowns, which were also made from very narrow fabric but I never compared them and I'm not digging through the already wrapped and packed boxes to see.  It could be.  In any case...very, very narrow fabric. 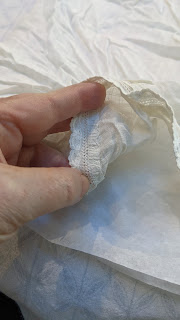 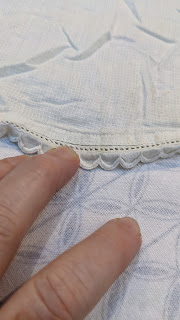 There's a wider sash gathered into the waistband for prettier bows.: 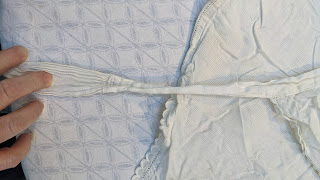 One of the aprons has a stamp on it.  "P A FLINT" is the text; Ida Hoover became Ida Flint when she married but I'm not sure who P A Flint might have been...daughter?  Mother in Law?  I'll have to ask Cousin Pat if she knows...
ETA:  The consensus seems to be that it's a blurred stamp and should be 'D.A. Flint'..as David A. Flint was Ida's husband.  In retrospect, if there was a stamp made to identify household goods, it makes sense that it would have his name...it was, after all, around the turn of the 20th century and women had very little in way of legal rights.  He did  apparently have such a stamp that he used on his tools.  There was a suggestion that perhaps the apron was made from one of his recycled shirts, but since the front panel is selvedge-to-selvedge and the stamp placement makes sense on the apron, I kind of doubt that.  I think Ida just used the stamp to quickly mark the apron as hers...for whatever reason. 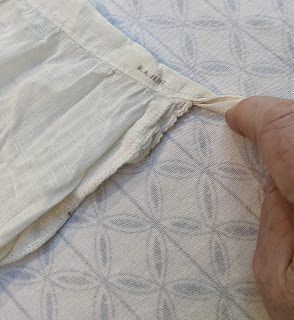 The next apron is TINY. 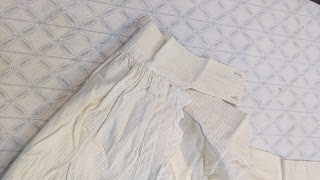 It appears that it was worn by buttoning it, but the entire waistband from button to button hole is only 23 1/2 inches.  Feasible, for a tight corset I suppose...or a very tiny person. Or perhaps even a child. 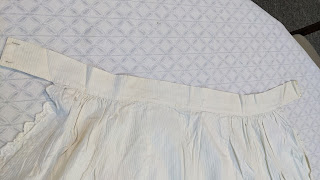 This apron has no pockets, but it does have slightly larger side panels; the center panel is still only 24" wide fabric. 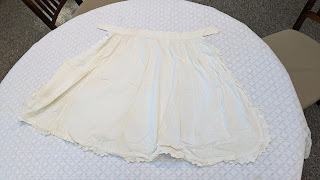 The next apron is cut on the crossgrain; it's very sheer; I'm guessing voile? 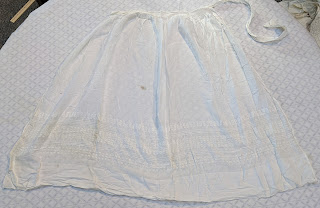 The pattern across the bottom is woven in; even the 'hem' is woven in. 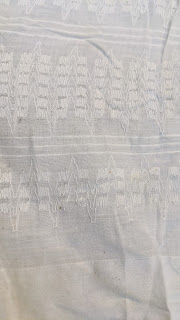 The bottom edge is actually a selvedge. 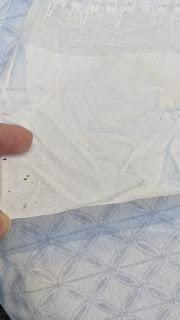 It's missing one of the ties; which is sad.  But it is pretty badly stained from storage. 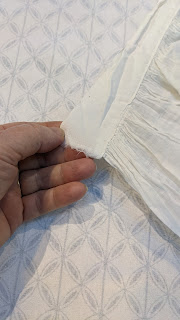 These aprons are all pretty sheer, which makes me wonder if they were for show rather than for actual 'protect my dress' use.

The other two are bib-style aprons.  Apron number one ties in the back, but I have no idea how the bib stayed up. 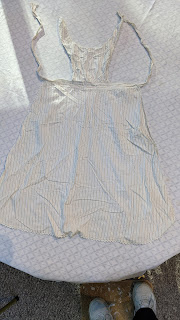 The only clue is this slight rust stain on the strap; I'm guessing there was a pin (possibly even a straight pin) there as I know aprons were pinned up years ago. 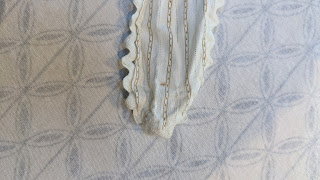 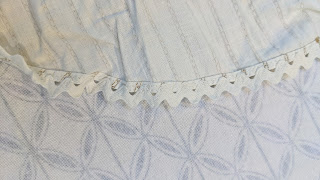 The last apron in the bunch is one that I've called 'the show-off apron' due to the incredible number of tiny, individually made loops which literally outline every detail: 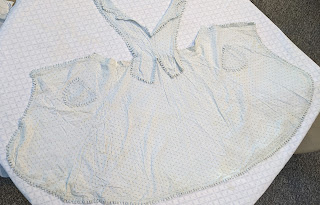 I can't imagine the hours that went into the construction of this.  And...there is again no visible means of closing it up, so I'm assuming it was pinned on as well. 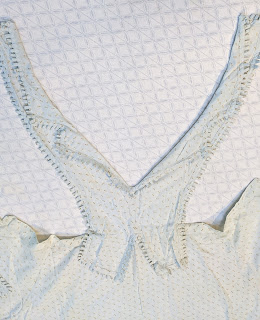 We have a bit of revers on the bib, all outlined with the loops.  The 'lapels' are attached with a running hand stitch, and the bib is connected to the skirt with hand sewn tacks...pretty much the only notable hand stitching (other than the button holes on the Very Small apron) in the lot. 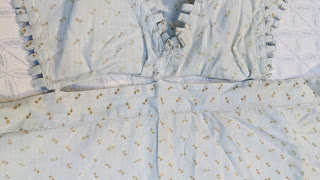 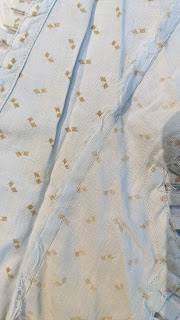 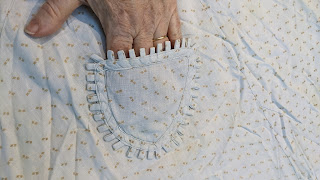 All those loops!!!  I can't imagine taking that much time on an apron.  I've never seen anything quite like it.  But, I guess if you can't surf the 'net in the evenings...why not make an over the top apron?