Oy.  I know it's October 6th; I've been out of town.  I had the whole outfit well before Sept 30; but this has been a CRAA-- ZEE fall and I've had problems getting pictures, let alone posting them., lol.

So, anyway, just to refresh your memory,  HERE is the link to the outfits Janice picked for September based on the selected Hermes scarves.

And, here is my interpretation thereof: 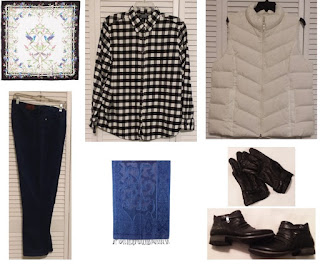 The actual new additions to the wardrobe are the flannel shirt and the stretch corduroy pants, both purchased on clearance from Lands' End in mid-September.  But I was so short on time when I purchased them that I didn't download the website images...and when I tried to do so today, I found that those particular selections are both sold out and no images available.  So I had to do the ol' hanger shot.  And, as per usual, the colors did not come out true.  The corduroy pants look navy but they are a deep royal blue...pretty much a dead match for the darker color in the scarf, which is a wool burnout from Novica (also sold out) and was my travel scarf to keep me warm on the airplane flight to Israel earlier this year.  The pants had to be shortened 3"; I have learned that, while Lands' End petite pants fit well when they arrive...it's not too long before they have shrunk to high water stage.  So I ordered regular inseam length and washed these first, then shortened them.  It was the only sewing I did on this grouping, lol.  The down vest is at least a year...maybe two...old; I've had the lined leather gloves several years.  The short boots were purchased on sale at the end of last winter to replace my previous short boots that popped a rivet on a decorative button.

So, here's the total collection now; I split it into two slides as I was having to make the individual pictures just too small to fit on one: 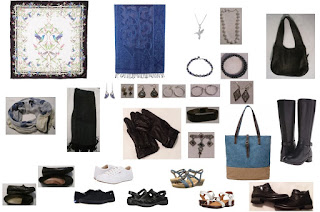 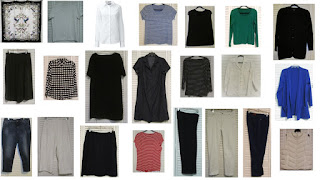 I will weigh in with my thoughts on the October outfits in the next day or two.