Well, my traveling buddy Miss A and I rolled out of the Rocket City about 7:15 Friday morning, which was just a pinch later than we'd hoped, then we missed an exit in Birmingham and went a bit out of our way to get to the venue.

So we were about 15 minutes too late to catch Cynthia Guffey's 9 AM class.

I am trying to console myself by believing that it was probably stuff I've heard before; but every time I hear it it gets a little deeper so my consolation is somewhat short.


That was one of the classes I'd picked; another one was full and another was offered the same time as the Louise Cutting class I wanted.

So I only took 2 classes...Louise on measuring/alterations and Cynthia on transferring changes made on a muslin/toile/mock up/pickyourfavoritepracticegarmentterm to the paper pattern.

But the noon style show was all Cynthia's designs, with her narrating about how the cut/lines of the pattern worked...it was like a free class.

These two ladies are both marvelous instructors and absolute delights to listen too.  I know there are other teachers who are really good as well, but I can't seem to bring myself to pick someone else's class over theirs. 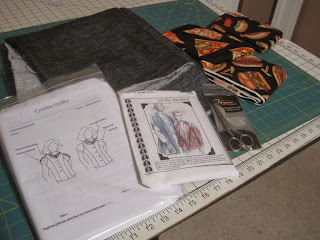 The black/white is a double faced linen from Louise's remnant rack; I walked by it 3 times before I succumbed.  The Of the Moment pattern was marked down as well, so I snagged it.  I may just use that fabric for that pattern...we'll see.

I picked up one of Cynthia's tops pattern; jeeminy, I have about 5 of her patterns now and still haven't managed to get one made...so sad...  I picked up a small pair of duckbill scissors, too; I have the regular size SOMEWHERE.  It's been missing long enough that I wanted a replacement, but decided to get the smaller ones because, well, you know, the others might show up.

The food print cottons are for Rhonda's Mary Bridge Pillowcase project.  I've been meaning to find some fabric from the stash and whip some up, but, well, I don't have a ton of cutesy cotton prints.  I happened to be standing next to a quilting cotton vendor while waiting for the daily grand prize drawing and spotted these fabrics.  Could NOT walk away.   I *think* I have some green/red/yellow fabrics about to use for the trims; this is my goal before I start sewing up other stuff this week.

If I get a chance to sew something up this week...

One day at the expo was fun; it's enough to shop, but I really, really would like to be there all three, so I could take the Thursday and Saturday classes, too.

But, trying to be grateful for what I had and not fret about what I didn't have.

Strangely amusing/slightly sad moment from the weekend:  one of the classes was held in a hotel across the busy highway, so they ran a shuttle bus for folks to take over.  I went down to the lobby a little early and struck up a conversation with another lady who was waiting for a friend to arrive and then she was going to head up to the vendor floor.

'What kind of quilting do you do?' she asked.

Um...I don't quilt?  Would like to make a quilt someday...I have some chopped up squares from scraps from the kid's clothes I made ages ago, but, nope, don't do it.  I make clothes.

She actually looked surprised....but the shuttle pulled up before I could tell her to check out Louise and Cynthia's racks...I hope she saw something inspiring.
Posted by Lisa Laree at 4:02 PM