I don't show a single finished project for March...but the truth is, I had 4 garments done to hems/buttons as of 3/31. The white twill blouse is still waiting on buttons, but I threaded up my sewing machine w/a double needle and finished the three salmon knit pieces on Friday and Saturday: a pattern I'd not yet made, an old favorite and a little creative play with a pattern I've made before.

The new pattern is the shell top from Simplicity 2603 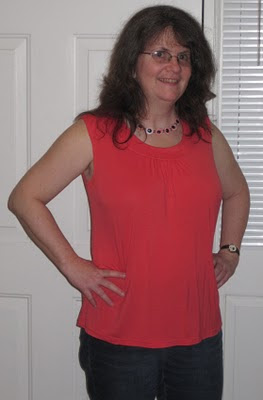 It's a little big; that's my fault for not checking the pattern sizing. I seem to have *assumed* a Medium was 12 - 14...and it's a 14 - 16. I can't believe I didn't check it, but, well, those things happen. So, yeah,it's a little big. But it's a drapey top to be worn under a jacket or cardigan anyway; I think I can get away with it for now. I'll trim it down a bit for the next iteration.

Next up is one of my favorite knit top pattens, Jalie 2682. 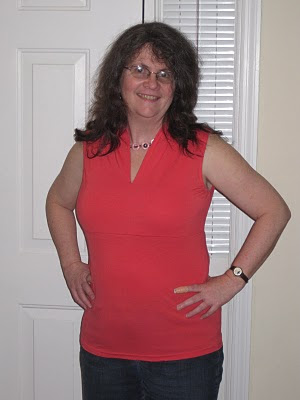 I dropped that empire seamline about half an inch and I think it's a little better. Both of those pieces were made from some extra-wide rayon jersey from Gorgeous Fabrics.

Finally, I have a Jalie 2919 cardigan that I played with just a bit, from a slightly beefier rayon/lycra blend from Fabric Mart. 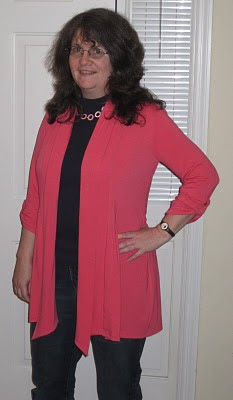 We have a handful of folks who sing backup on microphones in front of the regular choir folks; one very chic young lady has a knit cardigan with a little bit of a godet in the back and she has stood in front of me two or three time wearing that cardi. I was intrigued by the godet and decided to give it a try.

So I traced a new back piece, and added a seam allowance (and, while I was at it, a hint of shaping in the upper back) and a nice little fishtail at the bottom for a little swingy godet in the back.

And, since I was playing anyway, I borrowed the button tab from my other current project, Louise Cutting's OOP Town and Country Camp Shirt and lengthened it a bit; I also shortened the sleeve and widened it at the bottom just a pinch to get the cool little buttoned-up-sleeve.

Two other ladies on the worship team today had on knit cardigans with the same little sleeve detail. I was shocked at my trendiness. ;-) 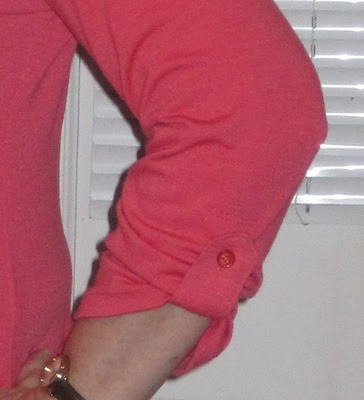