I can't remember hitting The Wall like I did last night; when I got the dress done to the zipper and realized that the only way I was going to get a zipper into that dress was to hand pick it, I nearly broke down and cried. But, with the boning in already and the extreme bulk of the gathered drapey band...well, there simply was no way my sewing machine was going to even come close to being able to sew anything close to a passable zipper. It was a wrestling match to even do it by hand. But it did, eventually, get done, and I got it to school about a quarter after 8 last night. 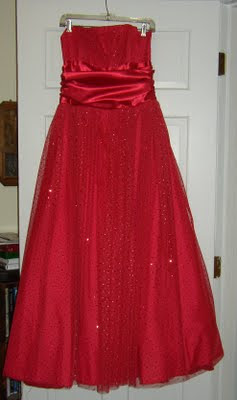 The actress wearing it said that it felt just a little loose at the top; one of the other sewing moms pinched the back and said there wasn't enough there to justify trying to alter it; it didn't *look* too big...and she did her next scene onstage with it on, just so we could see how it looked under the lights...and, to tell the truth, it looked fabulous.
But I was absolutely at the wall. I didn't even take in my sewing stuff to hang out and help. I gave my recommendations as to how to attach the little ruffle to the top edge, if they decided they wanted it (they did). And I came home and went to bed.
The anointing has lifted for the moment....
Posted by Lisa Laree at 7:00 AM